When Open Doors for Refugees sent out a call recently to the refugee community for someone who’d be willing to share their experience in Madison as part of a Zoom-based Open Doors Introductory Meeting, Rasha was quick to volunteer.  Unafraid to speak English, even on Zoom to a group of strangers, Rasha described how well she feels things are going for her family who arrived in January 2017 from Baghdad.  Her oldest son, Sajjad, was then ten, her daughter Malak was six, and there was a toddler, Lena.  In Bagdad, they’d known for three or four years about the possibility of immigrating to the US, as her husband Hussein had a position with the US Army.  As violence escalated, she became more anxious each day, not knowing, as she sent her children daily to school at the madrassa, whether they would even return.

When the decision came to move to the US, things happened very quickly.  One day they were in Baghdad, almost the next they were arriving in cold, wintry Madison.  Everything was different – raising children, work, and especially the language.  The most difficult thing, however, was worrying about her sister, family and friends back back in Iraq.

Now her son Sajjad is 13 years old, in 8th grade at James C. Wright Middle School.  When Rasha is talking on the telephone or on Zoom, he coaches and corrects her English, like a soft echo one can hear in the background.

“I’ll be honest,” Sajjad says of this year of virtual schooling during the pandemic, “it’s not fun. It’s challenging. But I can do it. I tell myself, Never give up.”

For her family, Rasha mostly cooks Iraqi foods, and they especially love her baklava, kebabs and buryani.  “They like American food too,” she sighs, “Burger King and KFC, the not-healthy foods.”

Rasha says she is looking forward to becoming more fluent in English and building a good and successful life.

Thank you, Rasha, for your willingness to step forward and to share your life and family. 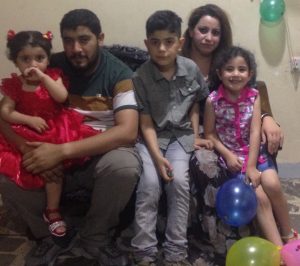