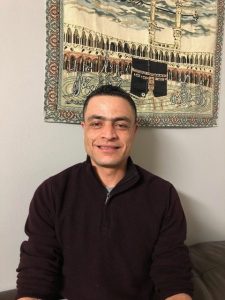 In 2012, a friend of Ahmad’s in his hometown of Daraa, in the southwestern corner of Syria, told him he knew a pretty girl inAhmad’s own neighborhood. With his brothers, all in their early 20s, Ahmad and his friend walked repeatedly past Hanan’s house. The young woman was indeed very pretty.

It was up to his mother, though, to initiate the matchmaking conversation. Ahmad’s mother went to have coffee with Hanan’s mother. Soon the two families were meeting in Hanan’s house, and Hanan agreed with the two mothers that Ahmad was the man for her. Dating was informal, always with friends, or sometimes in conversations on the verandas of the neighborhood of stone houses, all joined together.

Ahmad, skilled in carpentry and a tile-layer by trade, built a house for the two of them. It was the very day after their wedding when the two of them were on their way to see the house when they learned that war had definitely come to Daraa. With violence escalating, the families consulted, and Ahmad and Hanan quickly made the decision to leave home, to take refuge with a sister in Jordan. One dark night, they walked six or seven hours to cross the Syrian border. It would have been too dangerous to drive. The newly built house remained behind, never to become the young couple’s home.

In Zarqa, Jordan, Ahmad and Hanan were just two among Jordan’s estimated one million refugees. Because Ahmad was a skilled worker, he got odd jobs, but life was difficult. In 2014, amidst the turmoil and unknown future, they welcomed baby Yousef. Amazingly to Hanan and Ahmad, they received a cell phone call from the United Nations High Commissioner for Refugees (UNHCR) that their papers, filed years earlier, were being processed.

“We were assigned to Madison, Wisconsin,” relates Ahmad. “I did not know anything about it. I asked a UN Volunteer. He told me, ‘I’ve never been there, but I heard it’s nice.’ That’s all I knew, ‘nice.'”

With now two-year old Yousef, they arrived in Madison’s cold in January, 2017. By then, Ahmad’s mother was still in Jordan, one brother was in Sweden, a sister in Germany, and a cousin had been assigned to Kentucky. Ahmad and Hanan moved to Kentucky, where they heard weather was warmer, but soon returned to Madison. “Kentucky did not have Open Doors,” Ahmad explained. “Madison people were more friendly.”

Even though he landed a job doing work similar to his job in Syria, nothing was easy. “Language, customs, all life was upside down. My brain was confused. I had to forget everything, leave everything behind me. I called my mom every day,” he said.

“Now I feel more settled. In America, it’s like climbing upstairs to a good life. I have a good job working with a granite company and life is so much better,” said Ahmad.

Hanan lets Ahmad do the talking for this visit. She shows me the few precious things she traveled with to Jordan, then America: gold earrings from her mother, her wedding ring, and a special shampoo with an aroma that reminds her of home. She’s a favorite visitor at Yousef’s kindergarten, making fatir (thin, flaky flatbread) and reading stories in Arabic.

“Madison is so beautiful,” she says.