Meet Abdullah – A Father and Son Graduate Together

A father and son both arrived in Madison from Afghanistan in 2014 and both graduated in the same month of May, 2020 – the son, Mustafa, age 18, from East High School and his dad, Abdullah A., with a Master’s Degree from the University of Wisconsin-Madison in Cartography and Geographic Information Systems (GIS). Both had walked a longer path than most of their fellow graduates, spoke more languages, and knew two cultures intimately.

Abdullah grew up in the northern and eastern Afghanistan and had little awareness that children in other parts of the world weren’t living amidst an on-again, off-again war. “When I was just two or three years old, I remember being excited to see Russian soldiers entering our village, throwing candy to us kids.” By the time he was five or six, his family had to hide in a basement as Russian fighters bombarded villages. As dangers compounded, his family was forced to move to Peshawar, Pakistan, near Afghanistan’s border, home to millions of Afghan refugees. In Peshawar, Pashto-speaking refugees spoke the same language as city residents, though they were not granted citizenship or property rights and suffered prejudice and hostilities. Abdullah managed to finish elementary and high school and even began college, all in refugee-staffed schools in Peshawar.

In 2002 Abdullah’s family, which by now included his parents, six brothers and five sisters, moved back to Afghanistan. US forces had entered, and until 2008 the country seemed safer and services more reliable. Abdullah had started a degree in Civil Engineering in Pakistan, and he completed his BS at Kabul University. Just as in Pakistan, construction projects were booming in Afghanistan. Abdullah found immediate employment as a project manager with NGOs that were developing water supply networks, building roads, and putting up public and military buildings. Initially he was able to travel into mountainous areas with engineering teams that he supervised, but in 2008-2010, because of Taliban attacks, he had to work increasingly from the safety of offices in Kabul. “NGOs were easy targets, especially the engineers, who were often first on the scene of a new project.” Even back in the capital, though, because he was working in US-funded programs, he began receiving threats, and he worried for the safety of his family.

“It was a really difficult decision to leave Afghanistan,” he remembers. His work for the State Department’s USAID qualified him in 2013 to apply for a Special Immigration Visa (SIV), and the process went quickly. By September, 2014, he, his wife, four sons, and two daughters arrived in Madison, Wisconsin. In 2020, a new daughter, Kawsar, became the family’s first American-born child.

On paper, it looked as if Abdullah was an instant success. He spoke English fluently, got an immediate job, and the children entered school. In reality, life in Madison was so different, with no Pashto/Dari-speaking friends, and such anxiety about relatives back in Kabul, that the family became ill “physically and in our hearts,” Abdullah said. The entire family returned to Kabul in 2015 for three months. They reveled in the warmth of family, treasured time with Abdullah’s aging father, ate real Afghan food, visited mosques, and truly appreciated the depth of Afghan culture that did not exist in Madison. But there was no talk of staying. “I could see the political and military situations had become even more dangerous just in the year we had been gone,” Abdullah relates.

With many tears, friends and family once again gathered to bid them farewell – but this time Abdullah, his wife and kids knew what to expect. “We’ve been doing much better.” In 2017, Abdullah returned to Kabul once again, just by himself, to bid farewell to his father. His father died soon thereafter, probably 100 years old, a man who had witnessed a tumultuous century of rich, now-disappeared traditions and horrible devastation in the country he loved.

Last year, Abdullah, his wife, and children all became US citizens. Following an old tradition, Abdullah was a child who at birth had received only a single name, Abdullah. But on his US visa and Green Card, officials moved “Abdullah” to his family name and designated his first name as “FNU,” First Name Unknown. During initial years of employment and education in Madison, his colleagues and professors kept asking, “How do you pronounce your name, ‘Fnu’?” On his citizenship papers, he was finally able to officially designate a new last name for himself, his wife, and children, and to reclaim Abdullah as his given name.

After taking a few night courses at Madison College back in Wisconsin, Abdullah had his previous BS in Civil Engineering professionally evaluated and certified. The University of Wisconsin accepted him into their graduate program and approved him for some financial aid and for student loans. But the reality of going into debt made Abdullah realize that he would have to do it the hard way — work full time, make time for one course per semester, and pay tuition out of pocket with the help of a few small scholarships, including one from ODFR. He finished his ‘one year’ Master’s of Science in Cartography and Geographic Information Systems in three years, but with no debt and just in time to share the pride of graduation with his eldest son. 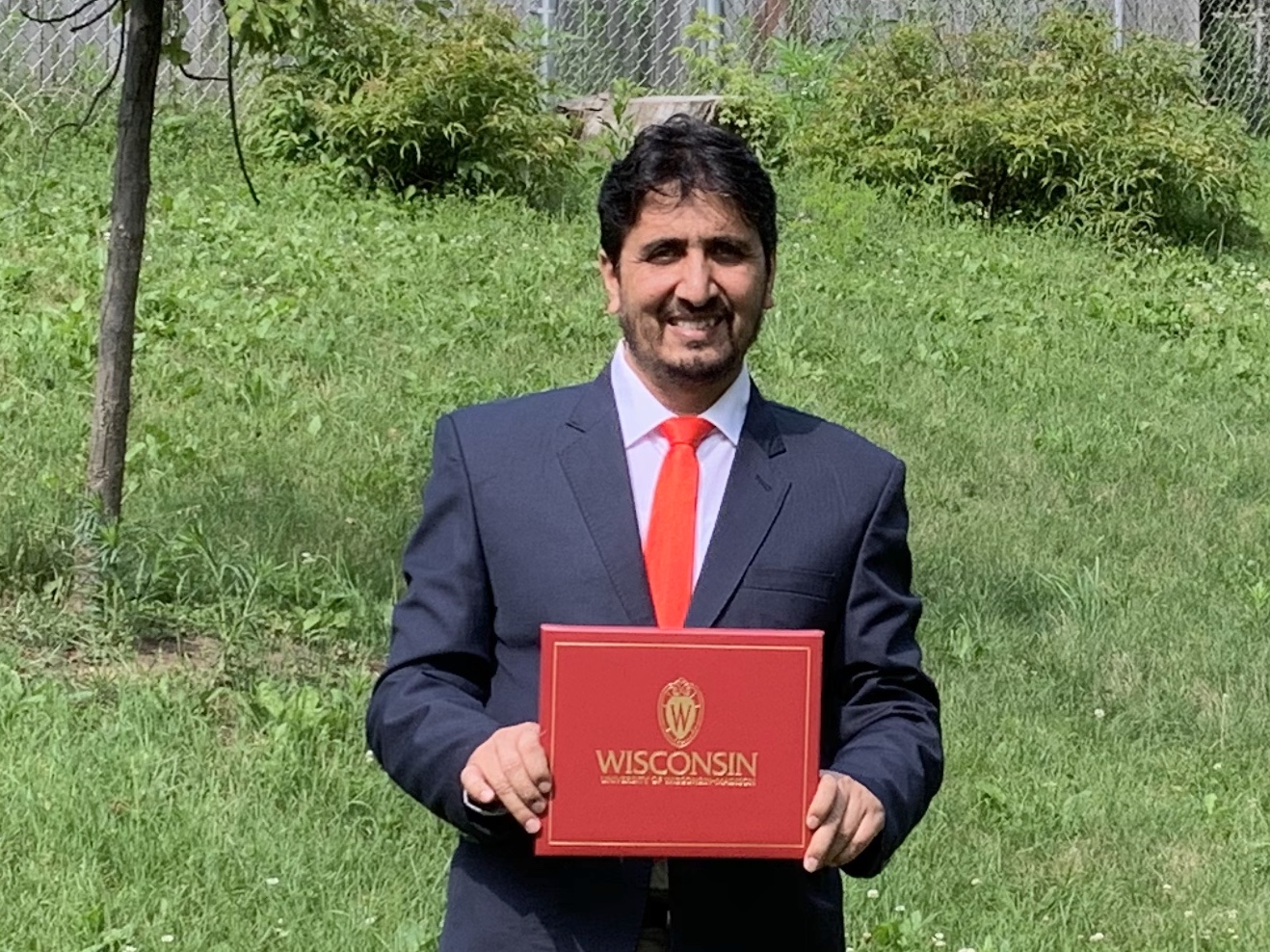 Abdullah’s painful memory of his first year of homesickness made him vow to help every single new Afghan family who arrives in Madison. No sooner does he hear of a newcomer than he and another friend who also came in 2014 get on the phone or knock on their door. “ODFR and LSS and JSS and other organizations are great,” he explains, “but they can’t explain things in Pashto/Dari. It makes all the difference to meet someone who knows Afghan culture, has been forced to move around, and knows the challenges of leaving one’s birth country and of adapting to a new one.”